The very lovely Steven, from The Speculaas Spice Company, recently sent me some of his speculaas spice mix to use in some recipes. I am a massive fan of this spice mix, and you can read a previous post I wrote about it HERE.

I love everything about it: the warming fragrance it spreads around your home while it is baking, the sweet flavours of all the spices combined into one mix, the versatility of it. If a recipe calls for ground cinnamon, you can guarantee this spice mix will take that recipe to a higher level instead.

One of my favourite fruits has to be the pear. So sweet and bursting with flavour, and so refreshing with the amount of juice they have. My favourite pear of all is the Conference variety. The riper, the better. I always have plenty in the fruit bowl at this time of year. I have such a sweet tooth, so they are great for satisfying my sugar cravings.

Pears and cinnamon (and Christmassy spices) are a match made in heaven, so I decided to come up with a recipe using my favourite pears and the speculaas spice mix. I wanted to bake something delicious for my son and Other Half to have in their lunchboxes, and flapjacks are always a winning lunchtime treat. I usually make them quite thin, but this time I wanted chunkier flapjacks, so used a smaller tin to bake them in, and was then able to cut them smaller too. We all adore pecan nuts too, so I always have plenty in the cupboard. Pears and pecans go so well together too, so I decided to add some for extra texture and flavour.

In a previous post I wrote about chocolate flapjacks, I mentioned the easy-to-remember ingredient ratio I always use to make them. (You can read that post HERE). As I was going to be using very sweet ripe pears, I reduced the amount of sugar in this recipe as I didn’t want them to be sickly sweet. It took me a couple of attempts to get the quantities right, but to me, this is now spot on.

I grated the pears using the large coarse side of my grater and as the pears were so soft and ripe, they created a lot of juice. In my first attempt I drained that into a cup and didn’t include it in the recipe. (OK, I admit it – I drank it). I worried the mixture would be too sloppy with it. In my next attempt though I included it, and it added so much extra flavour, and didn’t affect the texture.

When the flapjacks were cool, I made a cream cheese icing to drizzle on top, just because I love it with anything that has cinnamon in. If it goes well with cinnamon, it definitely goes well with speculaas spice mix! You can leave this off if you prefer though. 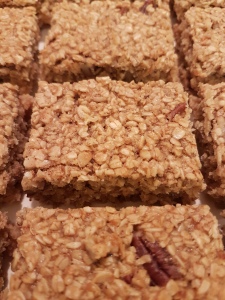 FOR THE CREAM CHEESE ICING (OPTIONAL BUT RECOMMENDED): 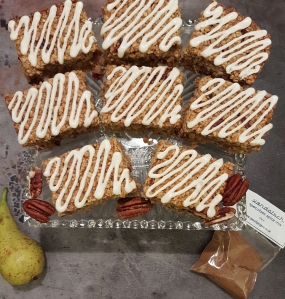 You could use grated apple instead of grated pear, although I haven’t tried that yet. You could swap the pecans for any other variety you prefer. Walnuts would be amazing too.

I hope you love these as much as we do! Don’t forget to check out Steven’s amazing speculaas spice mix! If you like cinnamon, or mixed spice, you will absolutely LOVE speculaas. Check it out HERE. 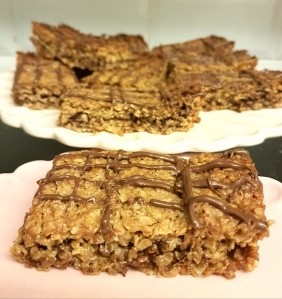 I absolutely love flapjacks. They are so easy to make and so satisfying to eat, and you only need a few ingredients. The oats fill you up and give you energy, and you can make them in so many different flavours. Today we fancied chocolate.

I’ve eaten some before that have been hard and crunchy, more like a biscuit. That’s not how I like mine. They have to be soft and chewy and slightly crumbly for me. The recipe to make them like this is so easy to remember. Whatever weight of oats you use, just add half that amount each of light brown sugar and butter. For example, if you use 400g of oats, you will need 200g of brown sugar and 200g of butter. Add 1 tbsp of golden syrup per 100g of oats and you have a perfect flapjack.

For this chocolate version I decided to add a layer of delicious JimJams Milk Chocolate Spread in the middle. I wasn’t sure if it would work but it was soooooo good. I warmed up a tablespoonful in the microwave for a few seconds to drizzle on top after they were cooled too. Naughty me. Well actually not really! That is why I love JimJams spreads… they have 83% less sugar than another very well-known brand. (I was introduced to JimJams through a subscription box some time ago. Find out more about what I thought of it HERE … the Degustabox discount code has now expired so don’t try using that though). JimJams is now much easier to buy too. It is available in many supermarkets for around £2.60 per jar.

So, here’s the recipe. Use the measurement guide I gave earlier if you want to scale the recipe up or down to suit your pan size. I would recommend using JimJams, as flapjacks do have quite a lot of sugar so you don’t want to add loads more with the other brand 😉

250g butter, plus extra for greasing

You could add a layer of your favourite jam instead of the chocolate spread if you prefer a fruitier version. JimJams also make amazing low sugar jams!

Let me know what you use to make yours!