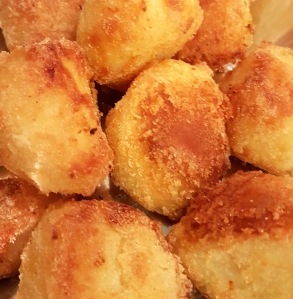 If I was told that I could only eat one meal for the rest of my life, it would have to be a roast dinner. Melt-in-the-mouth meat, honey roasted parsnips, Yorkshire pudding, stuffing, vegetables, gravy made from the meat juices, and the best part… crispy roast potatoes. My mouth is watering thinking about it!

A lot of people learn how to cook meals from their parents or grandparents. I never had that luxury so it has all been lots of trial and error to find out how to cook things exactly the way I like them. Roast potatoes are my favourite part of a roast dinner but it took me a long time to get them perfect. When I first started cooking I just plonked par-boiled potatoes straight in oil in the oven. They were ok, but not that exciting. Then I read somewhere to shake them in the pan to fluff them up, so I tried that. Much better, but still something missing. Then I think it might have been Jamie Oliver who mentioned using semolina to coat the potatoes, but I’m not sure. Whoever it was, they are a genius!

These roast potatoes are beautifully fluffy inside, but have a really crispy, crunchy coating which tastes soooo good. I used to think that the meat was the best part of a roast, but now it’s definitely the potatoes. You could roast them in whatever fat you prefer, but my preference is butter with a bit of oil to stop the butter from burning. This might disgust some people but I never ever put salt in any vegetables. I know most recipes say to boil them in salted water, but I never do. I’m conscious of how much salt is in all the food we buy so I use it as little as I can. I know chefs say you must always season your food or it will be bland but I strongly disagree with that. These potatoes really need no salt at all, their flavour is simply amazing. If you prefer though you can either par-boil them in salted water, or use salted butter in the roasting pan. It’s entirely your choice.

It is best to use Maris Piper potatoes as they have the best texture for crunchy roasts. I also leave them fairly big when I am cutting them up, as when you bash them around the pan to fluff them up you do lose a little bit of potato. Keep them whole if they aren’t very big. I’m not giving exact weights of potatoes to use, as everyone is different with how many they like with their meal. Aim for around 3 cut pieces per person (best to do more though as they are irresistible)!

Maris Piper potatoes, peeled and cut into large pieces (around 3-4 pieces per person) 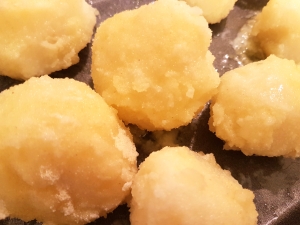